Blessed feast of Pentecost to each of you!

Today, we celebrate the coming of the Holy Spirit upon the Apostles and the birth of the Church, united in prayer around Mary, the Mother of Our Lord and our Mother.

The descent of the Holy Spirit moves us to open our souls to the work of God with greater generosity and docility. As a child is able to trust in father and mother so the soul must be guided by the Spirit of God to fully trust in his God’s fatherly guidance. In the shrine, we receive this grace. Through simple prayer and personal reflection, we achieve this openness. In covenant with Mary, we live filled with longing for such gifts and graces. Some thoughts from Father Kentenich’s words to the couples in Milwaukee, from 1956.

What does the Pentecost situation look like? What is the effect of the Pentecost miracle? My dear Schoenstatt family, I think that I should remind you of a vision that we Schoenstatt children especially like to cultivate. We are used to considering the shrine as the place where the Mother of God works for our time, what she formerly worked at the individual places on earth where she had been. Where was the Mother of God during her life on earth, where did she work? We only need to mention one or the other place. For instance, we think of Nazareth; we think of Bethlehem; we think of Golgotha; we think of the Cenacle, the place of the Last Supper.

The family[1] has its own office and calls it the Schoenstatt office.[2] All the hours are represented. After each three hours, a prayer takes us to a historic place where the Mother of God worked when she was walking here on earth. For instance, it reads: Your shrine is our Nazareth, is our Bethlehem, is our Golgotha, is our Cenacle. You see, that means Mother of God, what you formerly worked in Nazareth, in Bethlehem, on Golgotha, in the Cenacle, that you want to do now from this place for our time.

And today? How does the Mother of God stand before us? What is the historic place where she is effective? It is the Cenacle. You see, today is Pentecost. Today we see the Mother of God with tongues above her head, and we (see ourselves) together with the Mother of God, and the Holy Spirit comes down upon us here. 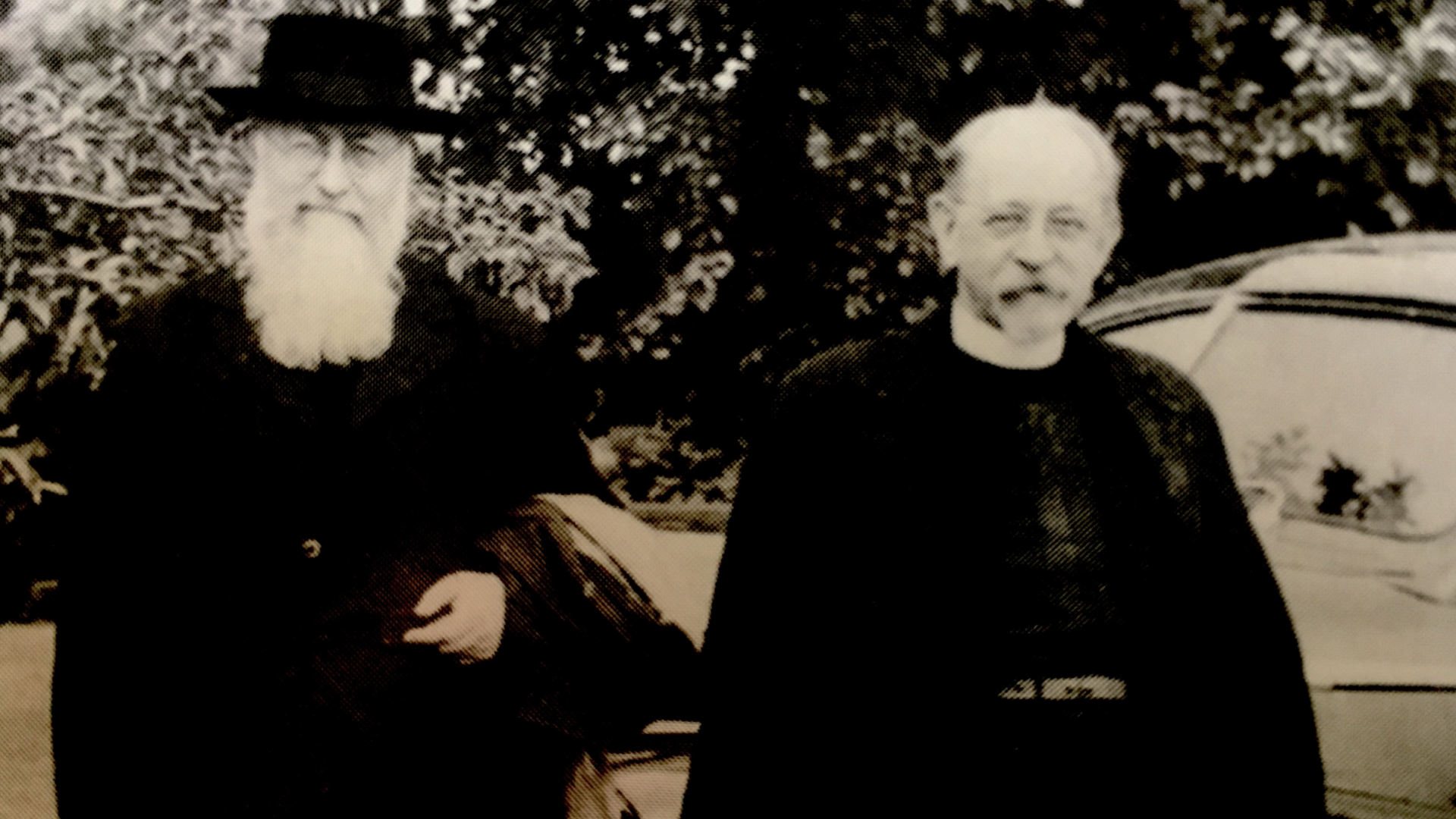 [2] In this connection, “Office” means the liturgical hours of the Church which is distributed over seven times of the day. The hours of the so-called little “Schoenstatt office” pick up the liturgical core ideas of the Roman breviary and apply them to the Schoenstatt world of values. The “Schoenstatt office” is part of the collection of prayers in Heavenwards. Cf. Pater Josef Kentenich, Heavenwards. Prayers for use in the Schoenstatt family, Vallendar 1973, p. 45-56.

On a day like today, 1948, Father Kentenich arrived in the USA for the first time. Find out what happened to him with his passport and how his problem was solved through trust… A Day of Trust

The difficulties already began in Rome. (….) In Brazil

I suddenly had the idea perhaps a sympathetic papal nuncio

would have the authority and readiness to extend the

passport? And in fact, both the nuncios of Uruguay and

Chile said they would be ready to immediately give such an

extension for one year. At my request and so as not to lose

a single month, they wanted to wait until the end of July so

that the passport would be secured until July 1949. With

that said, I set out in good spirits for the United States on

June 4. It was my plan to stay one month, or if necessary,

to stretch out my visit until the expiration date of my

passport, i.e. until the end of July, and then return to Chile

to apply for the extension that had been promised me there.

The flight went off without incident and the airplane landed

I approached customs and urged for haste so that I could catch the plane to Chicago which was already boarding on time. Then I was told: the passport has already expired and is consequently invalid. I tried to prove that the contrary was true using the documents at hand. The passport was valid until July 31 and today was only June 5. It turns out that according to American law and usage, all passports are treated as having expired two months before the expiration date. Since it was already June 5, the passport had already been worthless for five days. I still have to chuckle when I look back on that situation. The officer frequently used the word canceled. I had no idea of what canceled meant and could only associate it with the word chancellor. (….) I then explained at great length which chancellor had issued the visa and that it would have been easy for me to obtain an extension of the passport from the nuncios of Chile or Uruguay and my reasons for putting it off… It was all in vain. Both sides retained their composure. The moment the situation took a turn for the worse, I prayed to myself: I trust your might, your kindness, O Mother dear, I do believe that you are always near. Schoenstatt’s great Queen, O Mother mild, I blindly trust in you and in your Child. Since we were making no progress, however, I asked that I be taken to the consulate. Instead, two officers of Pan American Airways came to my assistance. They called Washington and discussed the situation while I prompted them, explaining what kind of passport I had. The response was immediate. I could stay one month, but I would have to leave the country by July 5 if no official extension [of the passport] had been made by then. The following was written in my passport: Valid until July 5. My hopes nearly fell when I first saw that; then I quickly noticed that the Americans usually write the number of the month first and then the number of the day. In the meantime, however, my plane to Chicago had long since departed. At my request the official called [the Pallottine Fathers in] Milwaukee and informed them of my new time of arrival. I offered him a tip, but he refused to take it, pointing out the medal he wore under his shirt and saying, I’m a Catholic. Another official drove me with an airline car about 15 minutes into the city to a house of the Jesuits. I stayed there until the departure of my flight which was towards evening. The official refused to accept any payment for the ride and asked instead for my blessing for himself and his family. This was my first encounter with American officials.