May 20: The Triumph of Covenant Loyalty 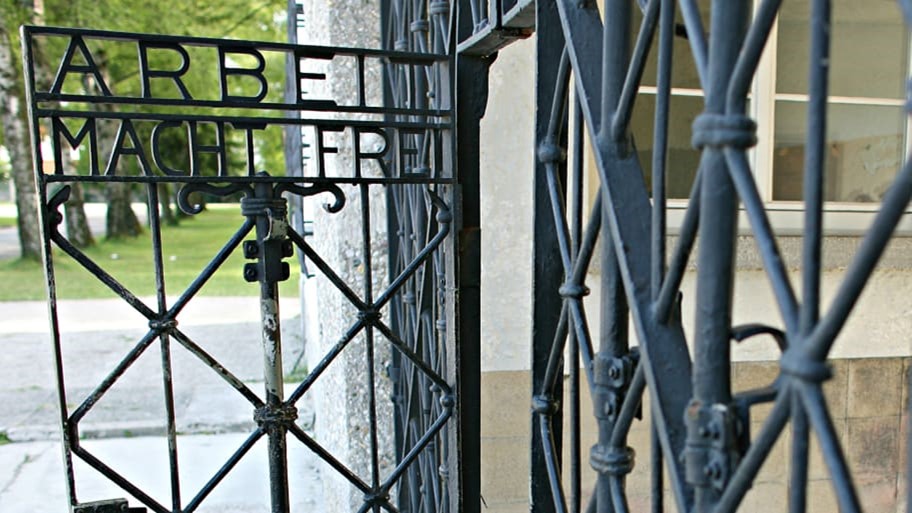 On May 20, 1945, Father J. Kentenich arrived in Schoenstatt after his imprisonment in the concentration camp of Dachau. The chain of events which took place and gave way to this memorable moment are a reminder of the power and faithfulness of the Mother Thrice Admirable of Schoenstatt (MTA). Father Kentenich coined the term: The Triumph of Covenant Loyalty.

On April 6, 1945, when Father Joseph Kentenich, prisoner #29392, reached for his shaving brush and razor early in the morning before roll call. As usual, he lined up with the rest in a line. Priests had been released already since March 27. When they were called Attention! Caps off! they wondered whether they too would be released that day. Indeed, they were!

The camp clerk came over and confirmed their fortune. Names were called out. All other Schoenstatt priests waited with great expectation for the letter K. They thought that if Father Kentenich was set free, they would follow. Father Fischer, a co-prisoner and spiritual child of Father Kentenich, narrates the following:

I was tempted a number of times to leave the ranks in order to inquire from the block of clergy how it was with Father. Finally, I dared, imagine the joy when he told me: “Yes, Father Kentenich is among them, but please don’t say it to too loud.” Quickly I made my way to Father who, as usual during roll call, was quietly standing in place. Beaming with joy I told him: “Father, you are released!” Calmly he asked me: “Joseph, are you sure?” “The clerk told me; I am sure it’s right!” “Alright,” Father answered, “then you may come afterwards and help me pack.” Father remained totally calm and composed.[1]

[1] Father Joseph Fischer quoted by Father Jonathan Niehaus in A Movement in Chains, 1984.

On a table, the prisoners were able to find personal items that would fit so that they could leave behind their prisoner’s garments. Upon being released, they walked through a number of gates until at last, they were free!

After visiting the pastor of Dachau, Father Kentenich continued with a fellow prisoner priest to Schoenbrunn. On April 14, they continued to Ulm, by train. The postwar conditions resulted in delays and other unexpected situations. Finally, they arrived at Ennabeuren, a town where a Schoenstatt diocesan priest was pastor, and where Schoenstatt Sisters served. 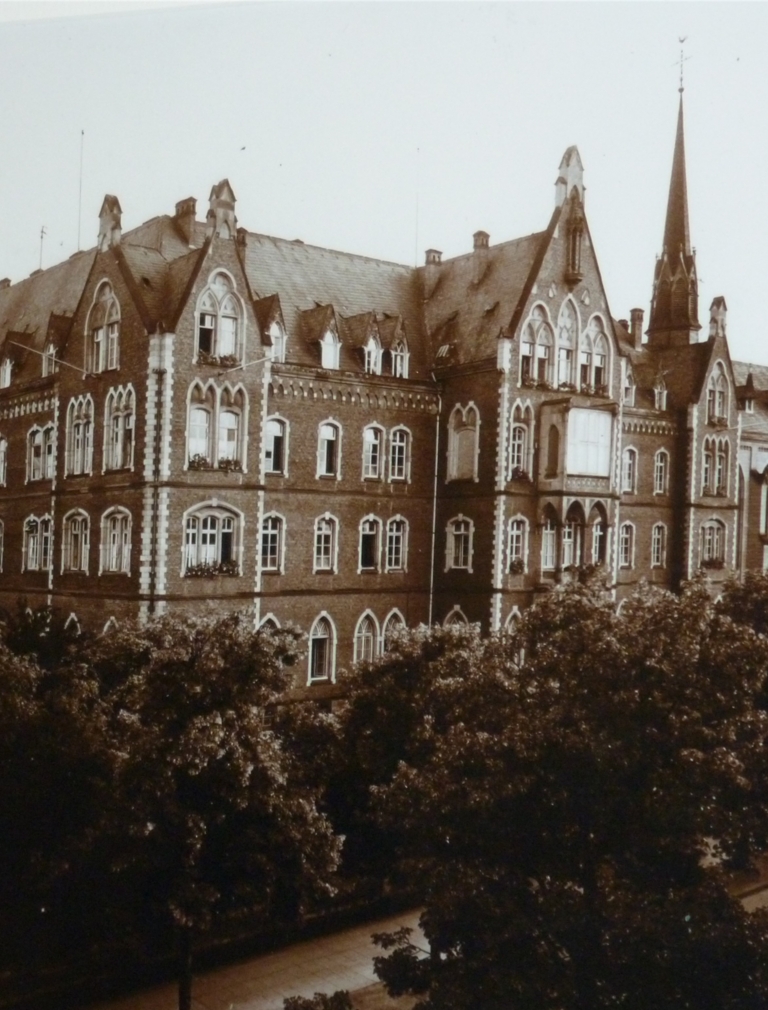 On May 6, while in Ennabeuren, Father expressed the desire to do all that was in their power to bring about the return to Schoenstatt as soon as possible. From that moment on, every opportunity was used to find the right way. For example, a test run with horses and buggy was made in Ennabeuren. After that, their trust in Divine Providence was rewarded and tested, time and time again.

On May 17, to the great surprise of Father Kentenich and the other priests, Father Menningen and his brother arrived by car to pick up Father Kentenich and drive him back to Schoenstatt. All efforts were made to obtain the needed permits from the Americans to travel through the different zones. By the time they were able to make headway, it was Tuesday before Pentecost. At this point, difficulties arose to obtain gasoline. They only received passes to go forward on Wednesday with half of the gasoline needed for the rest of the journey. They were able to continue their trip on Thursday morning, after having obtained 40 liters of gas. That morning they encountered some slow-downs caused by military vehicles. Stopped in between by French guards, who wanted to confiscate the car, they were released again and set underway after a former prisoner interceded for them.

Just before reaching Stuttgart, they had a flat tire. As Father Kentenich expressed it: This was an opportunity to pause and thank Divine Providence for the care and protection in providing the means to reach Schoenstatt.

Another challenge: Further ahead, an American soldier asked them to stop. He and got on the foot-board of the car and ordered them to continue through a different route. At the next stop, even though only the papers for the car were inspected, they had risked wasting gas. Passport controls were checked at the next stop. And, on the autobahn to Frankfurt, they had another flat tire.

When they decided to cross the Rhine at Oppenheim, the control at the bridge wouldn’t let them pass. Father Menningen mustered his courage and went to the private quarters of the commander, who kindly arranged the permit. Not being able to go through other bridges because they had been blown up, they decided to go through Main on the small ferry. On Saturday, May 19, at 10:00 PM, they finally reached the hospital in Koblenz.

Early next morning, on May 20, which was the feast Pentecost, one of the Schoenstatt Sisters working at the hospital in Koblenz went by bicycle to carry the joyful message of Father Kentenich’s return from Dachau. The news spread like wildfire! 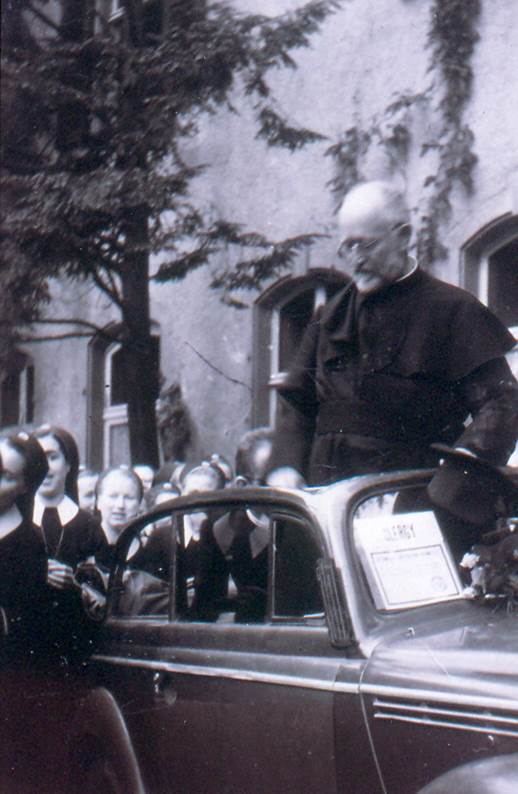 In front of the Original Shrine

The Shrine: Our Home

[In Schoenstatt,] after breakfast an eager activity set in.  Garlands were strung, flags hoisted and before long Schoenstatt was decked in festive decoration.  Garlands and red lamps adorned the entrance of the Shrine… [the entrance of one of a] House was decorated with the sign, “Mater perfectam habebit curam” (Mother takes perfect care). (…)

Father Alexander Menningen describes the homecoming this way:  People were streaming to the Shrine.  The Sisters were asked to line either side of the way.  Father wanted to come via House Sonneck past the Tertianship House.  Everyone should have an equal chance to see him.

The first house which Father Kentenich greeted from the car was the Wildburg (A stately old building in Vallendar, easily seen from the street leading to Schoenstatt).  The car paused for a few moments. He looked at the two towers and said, ‘Ah, the Wildburg is still standing!’  After passing through so much rubble he found his paradise land intact.

As the car approached Sonneck the orderly lines evaporated.  No one stayed along the sides of the road, but ran to the car and waved joyfully, flowers in hand.  Father stood up majestically in the car, which drove slowly, and greeted his home… The novices came running from the Schlosschen (Little Castle) and the Sisters from the Retreat Center.  Father greeted in all directions, and his kind eyes glowing warmly like the Pentecost sun.  Everyone followed the car and with a joy that showed in as many different ways as there were people.  Slowly the car drove down to the Shrine, passing behind the Tertianship House and through the gate near the Pilgrim Church, finally stopping in front of the Shrine.  Standing in the car Father looked with profound emotion at his precious little Shrine.  Fathers, Sisters, and many people from Vallendar stood closely packed around the car; some lucky ones received a personal greeting and handshake.  The bell of the Shrine rang in welcome, as loud as it could.  In the meantime the song was sung, “Behold, the chains have fallen!”

Father once said, “Most of all I would love to kneel silently before the picture of the Mother of God giving myself up wholly to the vision of the Triune God, and, with all of you simply gaze, love, and praise from now to the end of eternity.”

When we look at this photo of Father Kentenich kneeling before the MTA in the Original Shrine after his return from the imprisonment in Dachau, we, too would like to spiritually unite with him. In the spirit of prayer, let us kneel next to him in the shrine.  Squeeze ourselves there and try to imagine how he must have addressed the MTA on that occasion. He greeted her and she greeted him.

As the most hospitable mother, loving, tender, and understanding, she listens to us and supports us. She takes us in, from the distance. There is Christ in the tabernacle! Out of love for us, he delivers us from the bonds of sin and sets us free. Father Kentenich’s experience of freedom and trust in Divine Providence are a lesson for us in these hours of trial. Let us give all our cares, needs, concerns, and intentions, our loved ones, and all that burdens us to the MTA in her shrine. 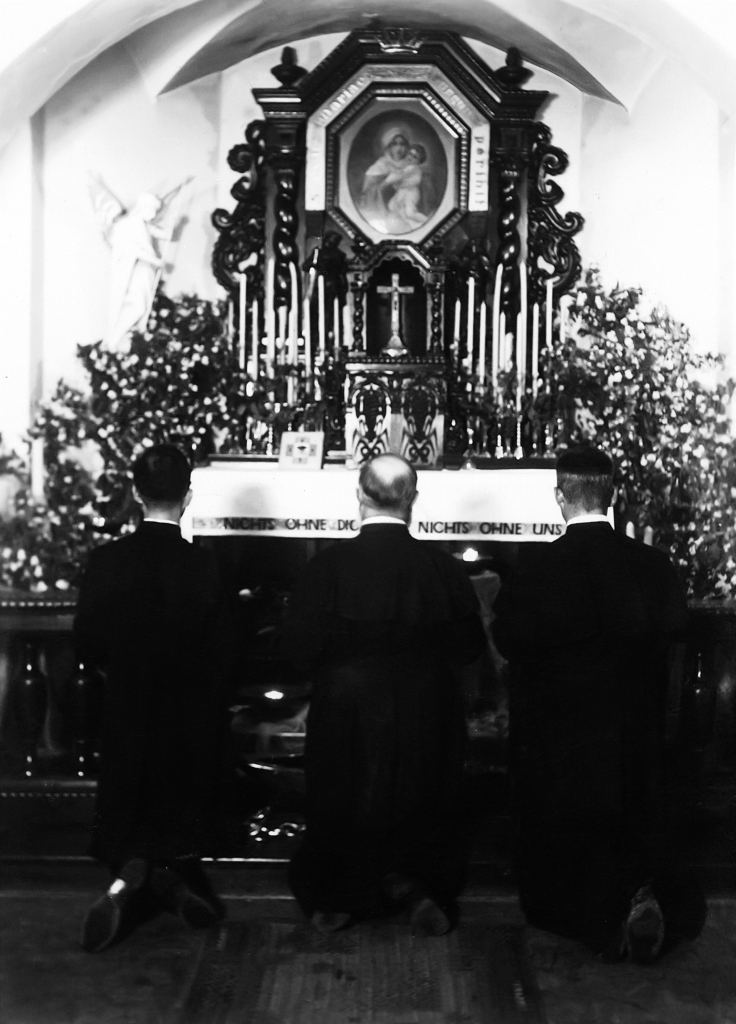 kneeling before the MTA in the Original Shrine

Together with Father, let us experience the grace of being at home in the shrine. Our home shrine, too, is this corner of heaven, an oasis of peace where we can let go of our anxieties and fears.  It is an extension of the place where we are accepted, loved, forgiven, and have a greater sense of self-worth.  Here we are safe, sheltered, and able to share ideas and longings, sorrows, and frustrations. Here we prove our covenant loyalty to the MTA.

As we celebrate this 75th anniversary of the return of Father Kentenich to Schoenstatt, on May 20, let us learn to build bridges of trust, freedom, and loyalty to our covenant of love. Let us keep our eyes and hearts open to the promptings of the Holy Spirit, as we, too, move forward to the feast of Pentecost.

Father Kentenich has given us the means needed to educate ourselves into personalities that want nothing other than to be instruments in the hands of Our Lady. With him, let us place ourselves into her hands that she may use us and educate us as she wishes. We can thank the Blessed Mother for the protection experienced thus far during the weeks of the pandemic. We can also intensify our prayers for those suffering from it. Lastly, we can always reach out to those suffering from its manifold effects.

Father Kentenich’s physical arrival in the Original Shrine on Pentecost Sunday, 1945, was the fruit of the MTA’s loyalty to his covenant with her. He never left the shrine! Spiritually, he was always there! Let us resolve to spiritually visit the shrine daily, as we continue to wait for the end of the epidemic. Let our spiritual visits be the “gentle force” we apply on our MTA, that the pandemic may come to an end, soon.