In the Eternal Holy Land

Schoenstatt Movement
On September 16, at the Schoenstatt Center, we held the funeral Mass for Norm Schultz. “On Friday, September 4, 2020, Norm saw the light of eternal life and jumped at the chance to be with his soulmate, Betty Ann (Nee Peshak), his wife of 56 years. He is the cherished dad of Mike (Terry), Mary Kay Buckley, and Laurie (Rick) Cox, loving grandpa of Tyler (Myranda) Schultz, Michael (Dana) Nicola, Danna Schultz, Kristin Cox, Ashley (Chris) Suchla, and Emily Cox. Also loved by other relatives and friends.
Norm and Betty Schultz belonged to the federation couples of the Schoenstatt Movement in Wisconsin, and as they were during their time on earth, they are today a source of inspiration for many other couples and families. Through the loyal participations in events and heartfelt collaboration with the background work, they became a hidden force that motivated many others to remain faithful to the covenant and firm in their faith.
They made their covenant of love in the 1980s and dedicated their home shrine in May 1984. They both chose to be the sanctuary lamp. As part of their family customs, they started each day with morning prayers in their home shrine. Many treasured relics of Father J. Kentenich, Sr. M. Winfriede, Gilbert Schimmel, Maria Kleimeyer, from the Holy Land, Rome, and Lourdes graced their home shrine. Special candles were lit at holy hours of meditation times in the shrine. When searching for answers in discernment, they would often pick a quote from Father Kentenich from the “Father Telephone,” a small box with tiny cards that have words and phrases from Father Kentenich written on them. Prayer intentions written in pieces of paper as well as gratitude notes were placed under a heart in front of a picture of Father Kentenich giving a blessing. Their home shrine had the name: Ecce Terra – Terra Sancta, which means: Behold the land – the holy land.
Knowing that a child of Mary will never perish, we trust that Norm and Betty Schultz are in heaven enjoying the bliss of the eternal holy land. 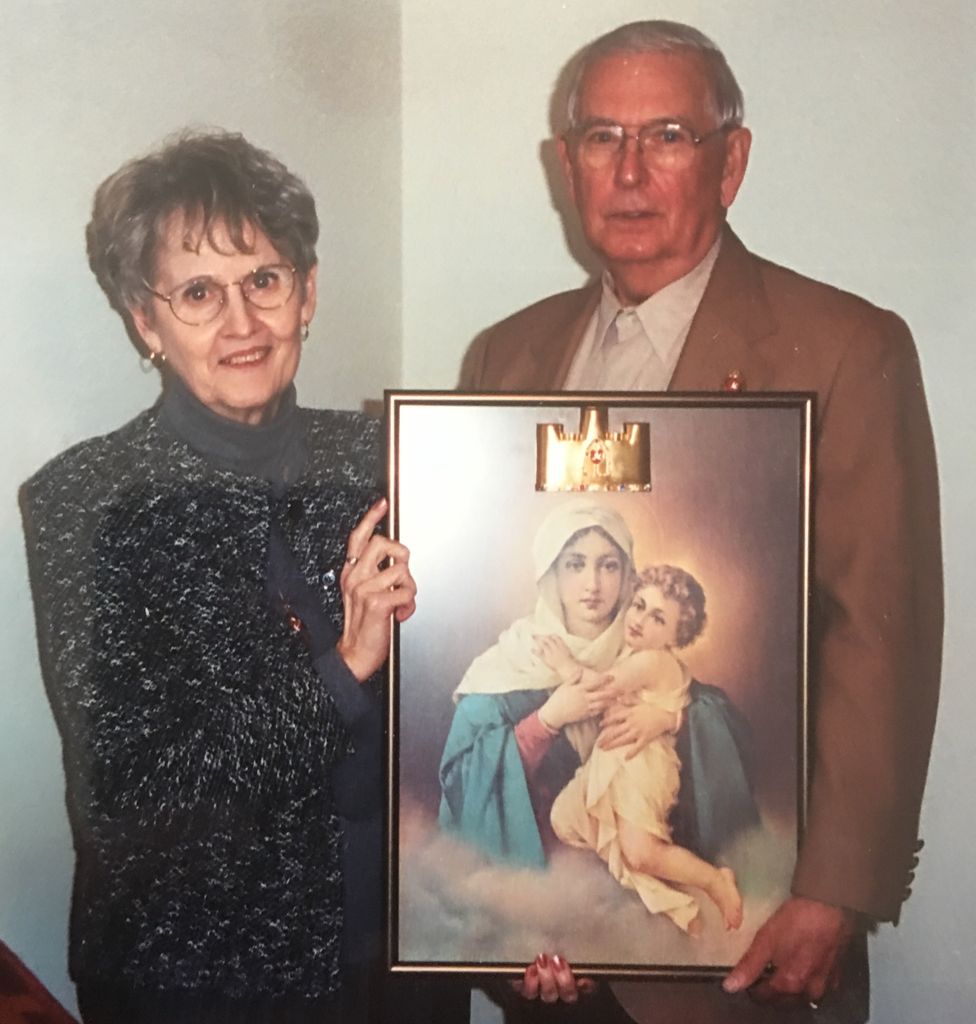