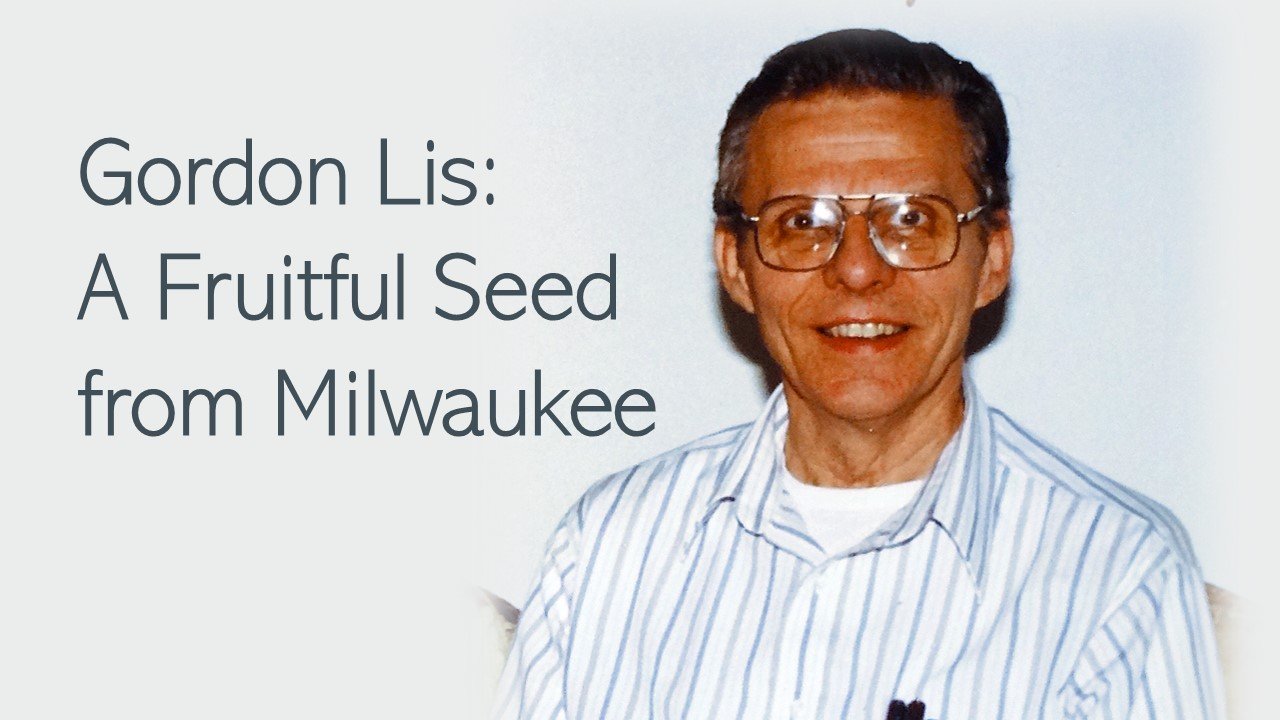 Gordon J. Lis passed away on Tuesday May 11, 2021 at Wilson Health, Sidney, Ohio, at 2:35 AM. He was born on April 19, 1938, in Milwaukee, Wisconsin where he came to know Schoenstatt in 1970 and together with his wife Carol, they made their covenant in 1971. Gordon led two Schoenstatt Boys’ groups in Milwaukee. From the beginning they were very much in contact with the pioneer couples. This experience led them to appreciate the pastoral work of Father Joseph Kentenich among the families in Milwaukee. Inspired by the words of Father Kentenich about St. John Bosco’s dream of the two pillars: love for the Eucharist and for the Blessed Mother, Gordon and Carol named their home shrine The Two Pillars.

Gordon graduated from St. John Kanty in Milwaukee, Wisconsin class of 1952 where he was valedictorian and was feature editor of his school paper. Gordon went on to the University of Marquette where he graduated in 1960 with a degree in Mechanical Engineering. Gordon obtained his master’s degree from the University of Wisconsin in Mechanical Engineering. While Gordon worked in Milwaukee as an engineer he invented the air suspension seat that is used in heavy trucks.*

Gordon married Carol R. Krasovich on December 01, 1962, at Holy Assumption Church in West Allis, Wisconsin. The couple adopted four children, two sons and two daughters. Along with his wife Gordon is survived by three children and six grandchildren: one son, Christopher Lis of Dayton, Ohio, two daughters, Marie (Kenny) Inderrieden of Sidney, Ohio, and Therese (Michael) Farmer of Oxford, Ohio, as well as grandchildren, Sebastian and Zoe Lis, Cullen Inderrieden, and Elizabeth, Sammy, and Matthew Farmer. Along with his parents, he was preceded in death by one son, Andrew Lis.*

In 1984 Gordon and his family moved to Sidney, Ohio, where he worked as a research engineer at Copeland Corporation. From the moment they came to Ohio and tirelessly to this day, Gordon and Carol dedicated their time and strength to the growth of the Schoenstatt Movement by leading as many people as possible to the covenant of love with the MTA. They attended every type of Catholic conference possible in order to pass out Schoenstatt literature and speak about the movement. Already in the mid-80s, they obtained an authentic shrine-size framed MTA picture for a future Schoenstatt Shrine in Ohio. They saw to it that this large picture traveled throughout Ohio for special occasions. Through the years, they led several formation groups of Schoenstatt and have mentored many other leaders who have continued the task of igniting in others the love for Schoenstatt and its mission. One of the Schoenstatt members commented: “Where would we be had the Lises not come to Ohio?” Indeed, many families and individuals wouldn’t know what Schoenstatt is, how to enter into a covenant with the MTA, or erecting a home shrine if Gordon and Carol would not have brought the flame of love for the MTA to Ohio.

Gordon was a member of Knights of Columbus Council 659 in Sidney. He also taught CCD, sang in the church choir, was a lector at Mass and wrote short meditations for a church bulletin in Milwaukee. Gordon and Carol belonged to the Right to Life where Gordon was past director of the Shelby County Right to Life. He organized speakers and prolife candlelight processions at the Shelby County Court House in Sidney.

Gordon loved to laugh, travel, playing chess and cards, and working in the yard. He was musically talented and enjoyed playing the guitar; he had a beautiful singing voice and wrote several songs, many dedicated to our Blessed Mother. One could count on him to intone Schoenstatt songs at any gathering.

The Mass of Christian burial took place Monday, May 17, at Holy Angels Parish in Sidney where his family and Schoenstatt Family members gathered to show their love and appreciation. In memory of his love for Schoenstatt, his loyalty to the MTA, and his love for singing, the Schoenstatt members who gathered for the burial spontaneously began to sing: “My Queen, my Mother…” and to pray his favorite prayer:

I trust your might, your kindness, Mother dear. I do believe that you are always near. Schoenstatt’s great Queen, O Mother mild, I blindly trust in you and in your child.